I am elated to say that the beauty that is Turkana, is one of the best kept secrets I have ever discovered. I shared part one of my “Homecoming to Turkana” https://www.wangechigitahitravels.com/my-homecoming-to-turkanaland/  and yet, Turkana continued to unravel more of its secrets to me. Move closer, and let me share with you part two of my “Homecoming to Turkana” which was experienced  in  Eliye Springs. 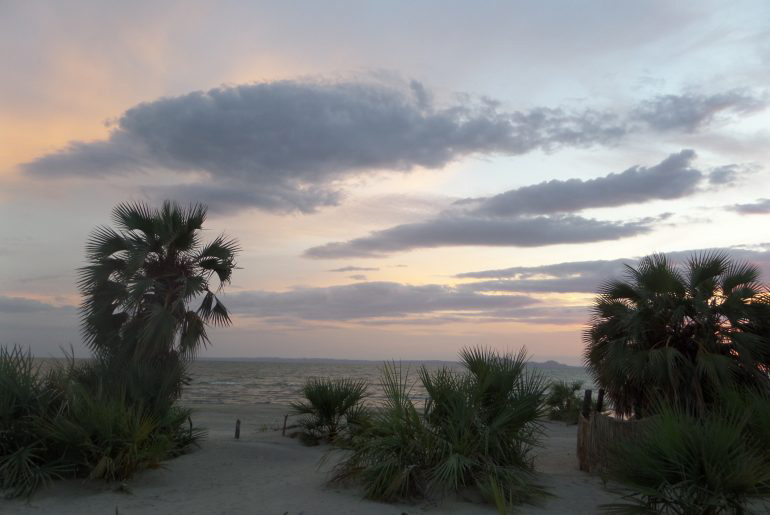 Eliye springs is best described as a beach paradise. Turkana is home to part of Lake Turkana and unlike the Marsabit side which is rocky, Eliye Springs side is all sandy beaches by its shores. A visit to Turkana Land would be incomplete without venturing there so go on, visit.  There is so much to experience and engage in.

I discovered that Lake Turkana has Central Island NationaI Park found on it, which is a UNESCO Heritage Site. It has three active volcanoes on it that have formed three crater lakes namely Crocodile Lake, Flamingo Lake and Tilapia Lake. It is also believed to be home to the worlds largest population of Nile crocodiles, most who breed here. I however was unable to venture there, but took time to enjoy the speed boats closer to the shore. 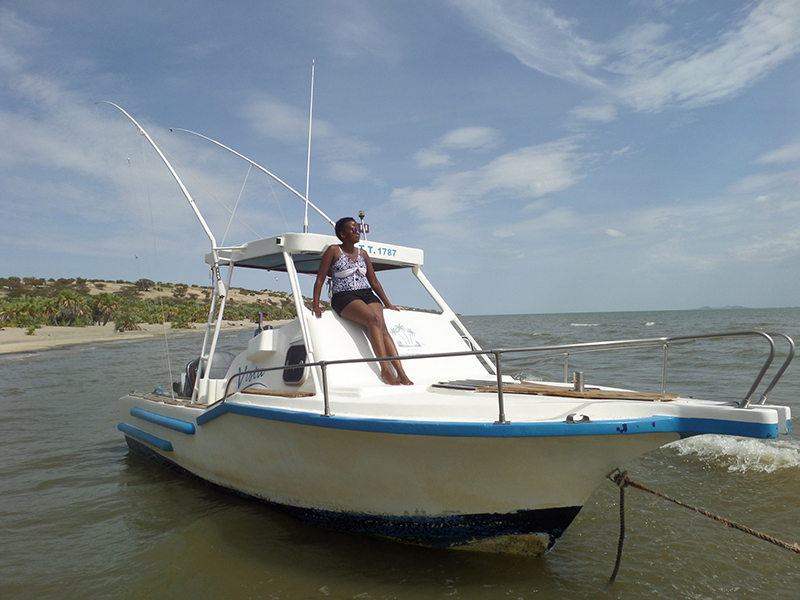 This is the Worlds largest permanent desert lake and the worlds largest alkaline lake. We first met when I ventured into Loiyangalani, Marsabit county a couple of years ago as shared https://www.wangechigitahitravels.com/demystifying-loiyangalani/ I however had no idea that it expanded all the way to Turkana county and just recently came to learn that it stretches for about 250km and is about 40-60km wide. What however remains a mystery is how such an expansive, permanent desert lake exists in a terrain that does not receive much rain. It was a joy to be re-united and like an old friend, it welcomed me with a big hug. I spent so much time swimming here, I seem to have been pardoned for my time away. 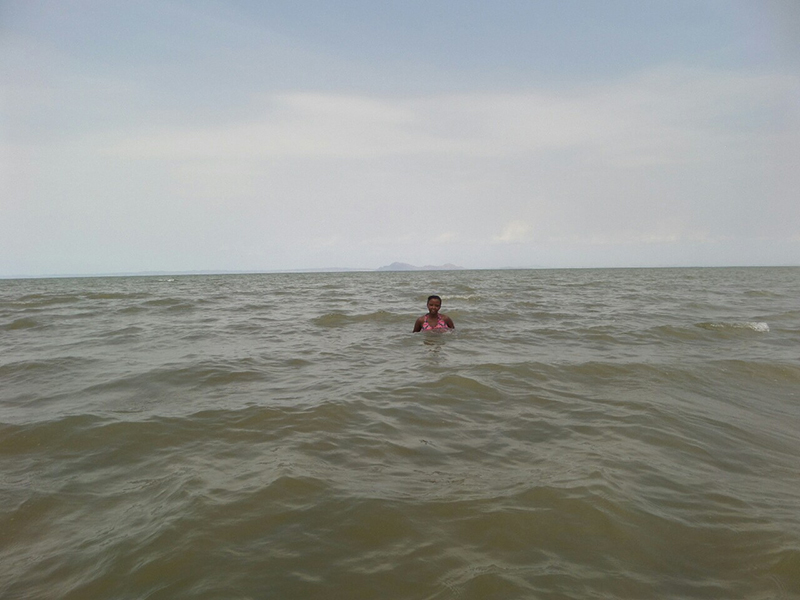 I like my beach having very few people and I like my beach being clean. The beaches along Lake Turkana offered me this and more, as they were not only super clean-no shrugging off twigs and sea weed as you  swim, but also, I felt like I was on my little private island. I had so much beach available to myself that I easily sampled various sides. 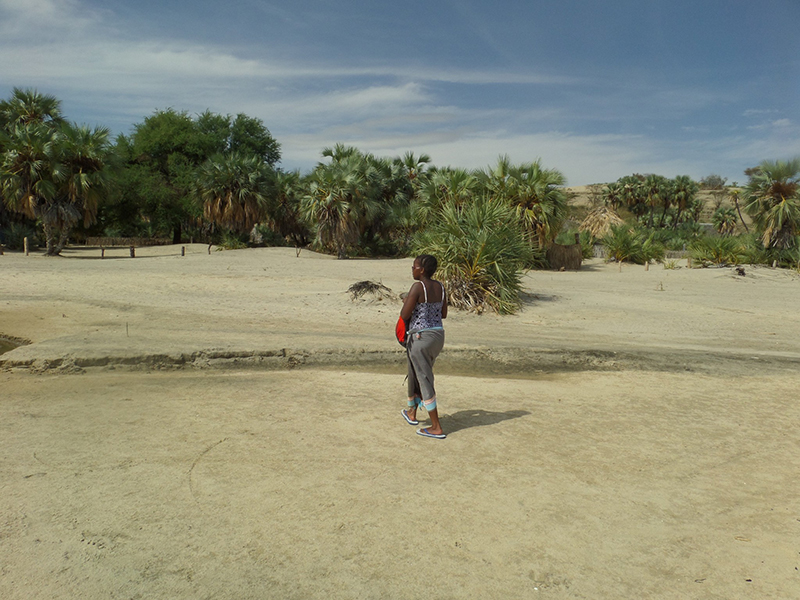 In some parts, the sand was brown while in others it was off white. I hear there are even other areas that are sparkling, bleach white that I will seek out on my return trips.  I was also fascinated with how at some places, the edge where the waters would meet the beach, was a stretch of what looked like black sand that shimmered in the sun. I was informed that the black is remnants of lava flow from the active central islands found on the lake but I am yet to confirm if that is true. 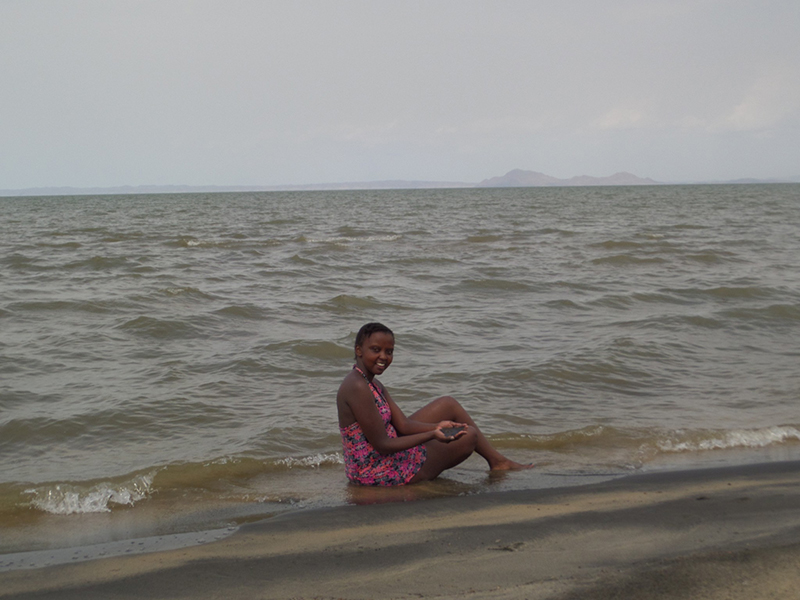 The area is referred to as Eliye or Ille springs, after a spring in the area that provides fresh water for both the locals and the plant. Noting that the area is generally dry, it is a mystery how the spring survives and is always cool and crystal clear. In the areas that it passes, it is green all round proving nourishment to plant, animal and human life. Interesting to also note, was that it also drains into Lake Turkana.

ALSO READ  My homecoming to Turkanaland 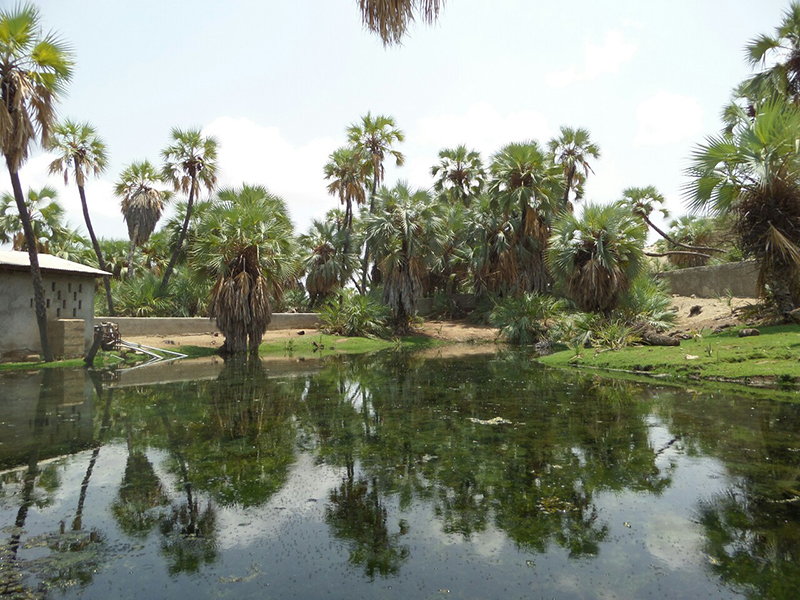 The main community living in this area are the Turkana who are dominantly pastoralists. You will thus get to see their homes known as “bomas” in the environs. The homes mainly seemed to have an oval shape but with a “cap” at the top. It is interesting to note that it is the women who build the homes using reeds, twigs and sticks. 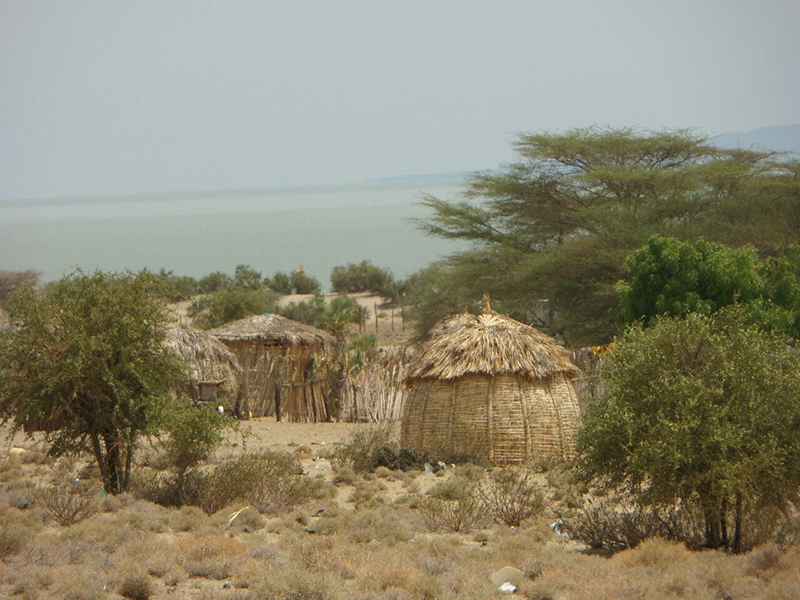 From Lodwar, my new friend turned guide opted to give me a desert safari experience. He thus opted to not use the official route but instead, the route the locals prefer to use. Kindly note, if you do not know this route or do not have someone who does, keep to the official route. You can easily get lost or your car getting stuck. 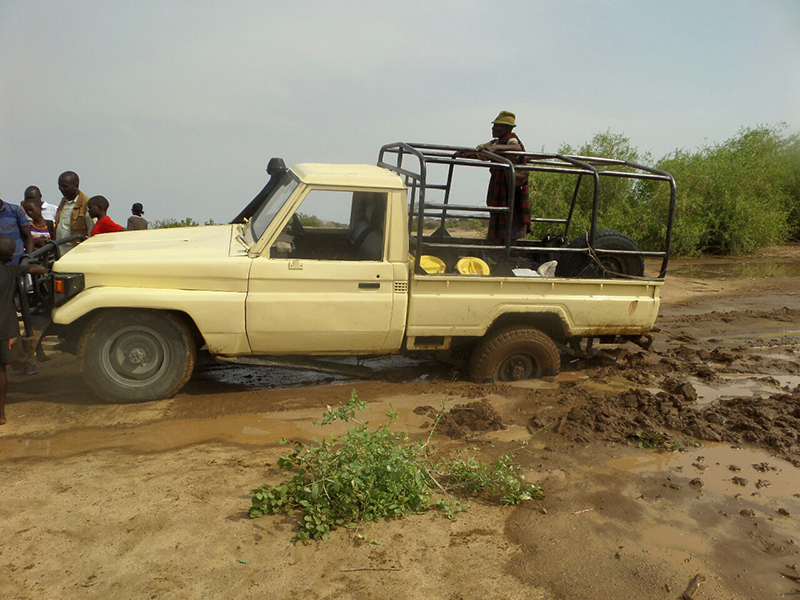 Only problem with that is that you will miss an amazing, desert safari experience. The sand on this route is super soft, the scenery very beautiful that we kept stopping the car, for me to just stare. All around me were different types of plant life, different types of animal, anthills the size of trees among others. We even stumbled upon a donkey migration-imagine that 🙂 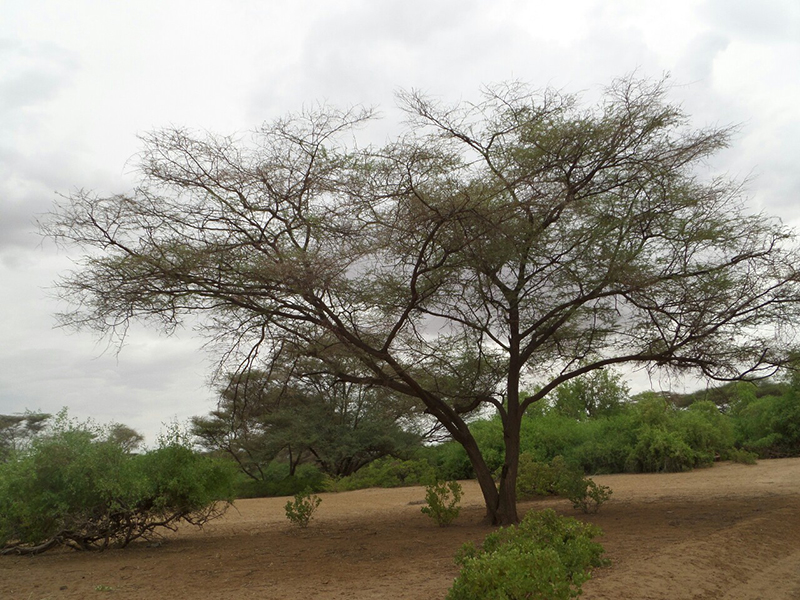 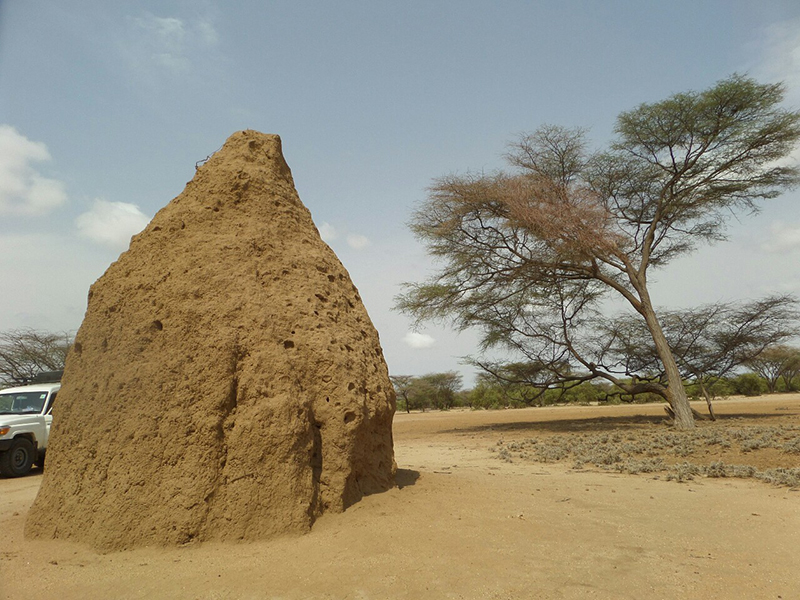 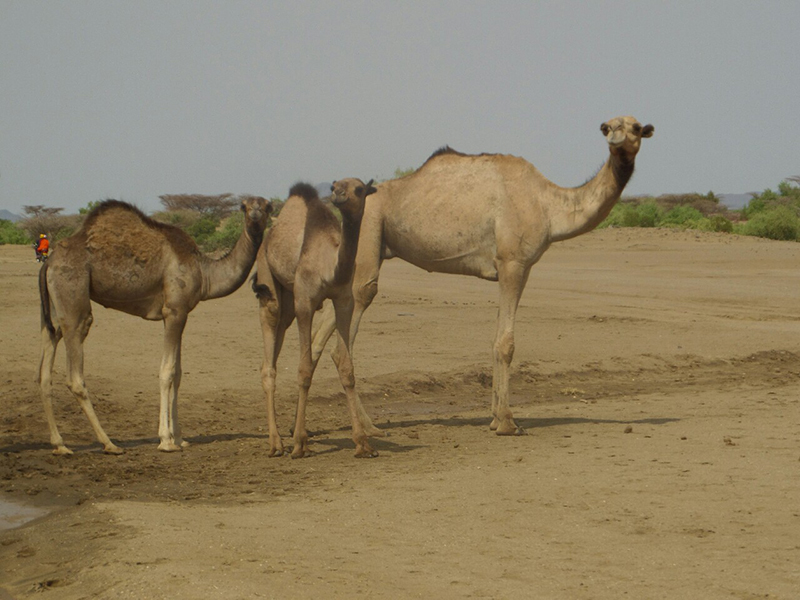 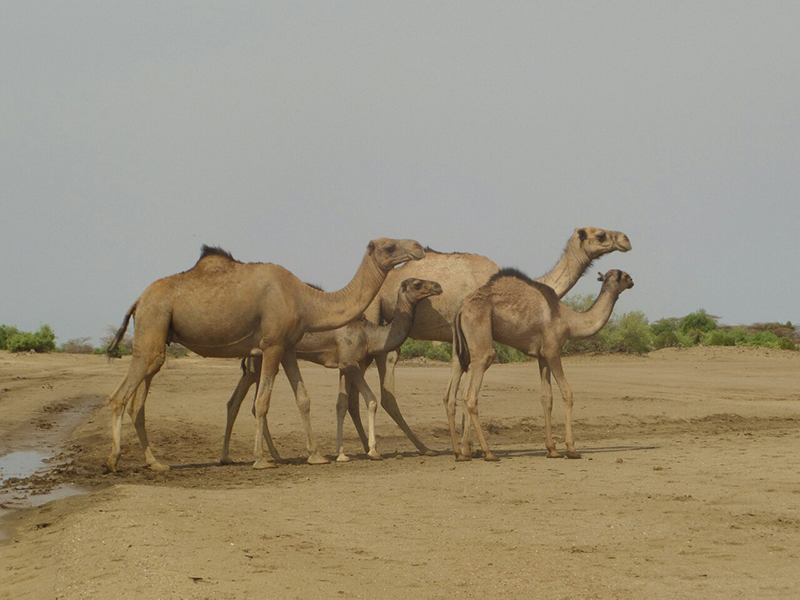 The sunrise and sunset here will leave you breathless. The sun seemed to be smiling with me, showing me its best looks so I could not only enjoy the sight, but, also take take memorable pictures from there. 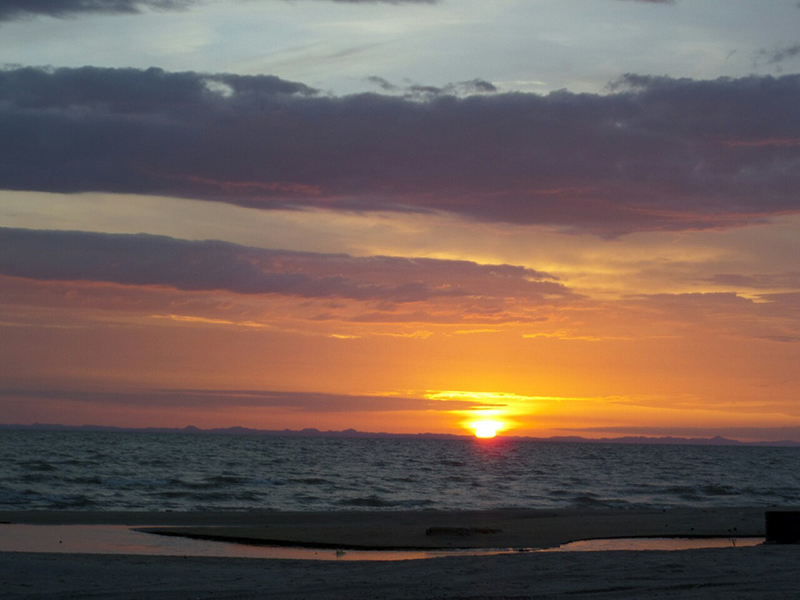 The moon here was also out to show off. It shone bright, breaking from the monotony that was the dark skies. This place is ideal for romantic walks at night and/or during the day. 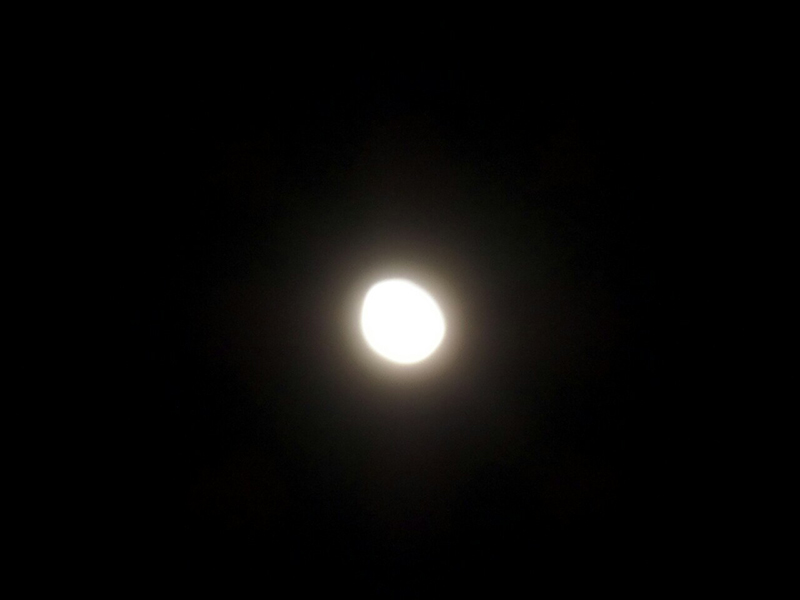 There are various options of accomodation, with even the option of sleeping outside by the lake. I however had the privilege of staying at one of the prime locations, Eliye Springs Resort. Their facilities are really awesome having variety from the tents, manyattas, rooms and the Bandas. This ensures that whatever your budget, you are catered for. The staff are truly friendly and nice and I had the chance to meet with the owner Mr. Rolf. I had a couple of firsts here, which I will share in a longer blog post about the place. 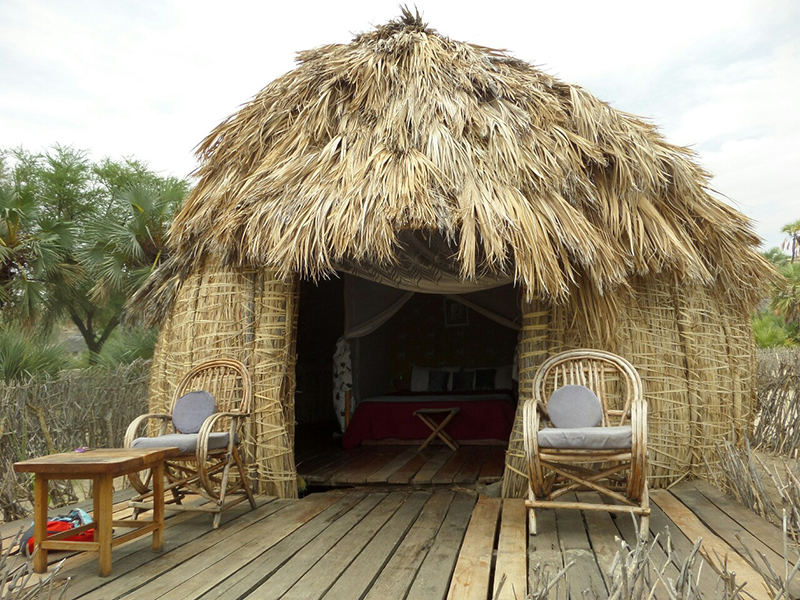 The “News” and the ‘netsphere told me that Turkanaland was a barren land. They told me that no life, whether plant, animal or human would want to live there. They told me, there was nothing to do or see there, apart from look at the barren rocks, the scorching sun and the desert that they claimed it was. Well, hear ye, hear ye, not from rumours, not from gossip but from one who “dared” to venture into Turkanaland, as a solo backpacker-THAT IS FAKE NEWS.  It has borne the brunt of negativity and indeed a generally harsh terrain, yet like a pearl which is rugged from first look, it has hidden precious gems within it.  Eliye redefines the true meaning of relaxing, adventure and a wholistic island and beach experience. Pack your bags, venture into into Turkana and let is reveal its authentic, beautiful self to you asit welcomes you home. For more on my amazing experience in Turkana/Turkanaland check out :

Magoroto Forest Estate -Will Leave You Green With Envy