We arrived in Isiolo from Meru after a near mis-hap and after discovering that the two towns were only about 53km apart. Isiolo is mainly inhabited by the Borana community and since I know little about the community, I thought it would be a great, mind opening experience. The area also has a high Muslim community who are dominantly conservative, thus, I would advise one to dress modestly.

Upon arrival, we were met with challenge upon challenge. One, the ladies seemed averse to talking to strangers which means we had near nil interaction with them. Two, we had been advised not to engage the men as it is culturally inappropriate.  After several attempts, we gave up, clearly, we wouldn’t have the cultural integration experience we had hoped for. Three, when we asked the other locals for suggestions on places of interest in Isiolo, they all seemed to have no recommendations. They all unanimously directed us to travel outside of Isiolo to either Meru or Archers Post. We were truly saddened by the twist in our plans but decided to soak in a bit of Isiolo town by walking around before we headed out.

If anyone reading this has friends or family in Isiolo and would be willing to assist me to have a cultural experience with the Borana  or the Somali community living there, kindly contact me. Noting that our options were limited, we followed the instructions of the locals and moved on to Archers Post.

The area is located in Samburu county and is about an hour via public mini-van from Isiolo. The area is inhabited mainly by the Samburu community who are still very active in upholding their culture and are pastoralist in nature. We dropped off at the last stop of the mini van and then proceeded to ask the driver to point us in the direction of the villages. After staring at us strangely,  amused that we knew not where exactly we were going, he engaged us in small talk on what our intentions were. After we informed him that we were interested in exploring the area and more so the cultures of the communities there,  he informed us of a local guide who could assist. I confirm that yes, I was weary of this new twist  but I have learnt that it is good to sometimes give people the benefit of  doubt when my gut is silent. This is how we were introduced to Moha who ended up being the coolest guide ever. He took us deep into the Samburu villages and enabled us to have Samburu cultural integration and experiences.

The area is generally dry, arid and hot. We got to visit a local manyatta which means a community made up of several families related by blood and/or marriage. In Samburu culture, it is the ladies that build the manyatta houses in addition to their many house chores. The houses are made of pieces of wood and then thatched with soil and cowdung. Most then put a paper cover to keep the house dry when it rains.

The women are always adorned in some sort or the other of their beautiful, bright coloured jewellery. Adornment isn’t something one wears only for a function, it is done daily. The jewellery the women wear are made by the women themselves who also make the same for their men. 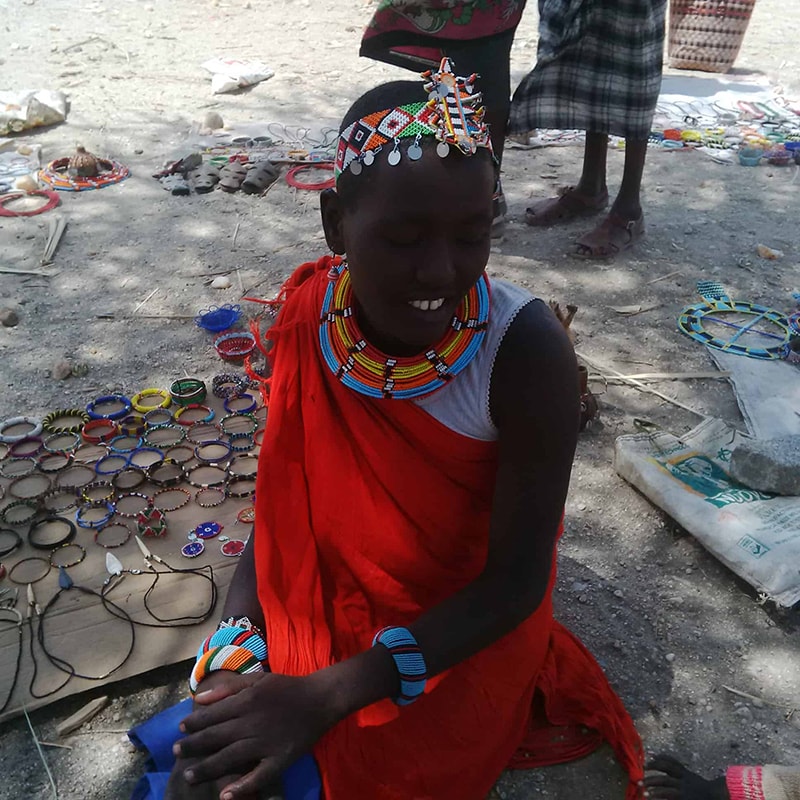 We observed the men light fires by using traditional methods i.e using dry grass, cowdung and small pieces of wood with no matchstick in sight. They rubbed the wooden sticks together atop the dry grass, which was laid atop dry sticks of firewood. Soon enough, the fire was lit.

To top it off, the community here danced for us and unable to hold ourselves back, we joined in.  Needless to say, I left the area beaming from ear to ear. Kindly note to keep track of time, something we didn’t. When we returned to the bus/matatu park at around four oclock, there were no vehicles going back to Isiolo and Moha was nice enough to assist us to hitch a ride to Isiolo.

I had the privilege of walking along the banks of this major river that supports a lot of  plant and animal life on its journey from the west of Mount Kenya, through to Somalia where it joins Jubba river. Ewaso Ng’iro in the local language as I was told, means, muddy/brown water. Indeed, the water was brown in colour but this did not deter the community and the livestock from partaking of it.

As mentioned earlier, our plan to visit Isiolo was last minute, we thus took a taxi from Meru and arrived at about 9p.m. We had googled for accommodation in the area and opted for  “Northern Galaxy Hotel”, a choice we are glad we made.  It is beautiful, clean, cozy, centrally located, pocket friendly and the customer service was great. When we called to enquire, the lady we found was very helpful and even guided our taxi driver on directions. What made them stand out is when we arrived, we were informed that the owner, the lady we had spoken to on phone had opted not to leave the establishment until she had ensured we had arrived safely. Now that’s what I call extra customer service.

This trip was covered in three days as part of a “3 day Backpacking exploration.” A trip that was meant to be Nairobi-Meru expanded to Nairobi-Meru-Isiolo- Archers post-Isiolo-Meru-Nairobi covering over 750km via road. This teaches one to be flexible whenever travelling, as the road sometimes decides to over expose itself. To the counties of both Meru and Isiolo, you have lots of work to do with the locals in regards to positioning yourselves as travel destinations. It is unfortunate that the locals in your area would respond “there is nothing to do or see”, yet I believe so much is available. Locals are indeed the best marketing tools, you need to start educating them on their county. To the county government of Isiolo, kindly, can you facilitate  me with a cultural integration with the residents of Isiolo. Their culture is rich and indeed, it would be an honour to experience it and share the same with the world. For more on this trip check out: